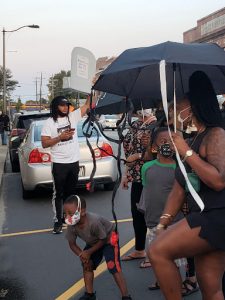 Community members, including graduate students, attended a march against police brutality in the wake of the three-year anniversary of Marcus Smith’s murder by the Greensboro Police Department. The march, occuring on September 11, 2021, took place during the North Carolina Folk Festival. The timing was symbolic and significant because Smith died during the festival in 2018. In addition to remembering Smith, the march was to honor others across the United Stated who were murdered by police violence.

Those present for the march were gathered to listen to organizers speak a few words before leaving for the silent march. Clad in all black, the crowd of mixed races, genders, and ages, listened attentively for directions and gathering materials, such as makeshift cardboard gravestones. The route ended where Smith died on Church Street in downtown Greensboro. To get there, the mass of protesters severed a crowd of folk festival goers. They stopped, with a crowd on either side, as organizers called out the names of the 18 people on the cardboard gravestones using a megaphone. People were thanking the attendees. Others took photos and videos of the silent procession.

At the destination, tiny battery-lit candles that emanated a warm glow, were handed out to marchers. The names of those passed were called out one last time. Each marcher with a tombstone laid it on the ground when their person’s name was read aloud. Organizers taped the signage down, hoping they would stay for a little time before they were removed, most likely by the police department. The candles and imitation flowers were laid near our makeshift sidewalk graveyard before attendees dispersed.

Graduate students involved in the march and the Fall 2021 class Communicating for Social Change, created communication studies-based projects and papers to expand upon the activism they participated in first-hand. One of the projects included a graphic novel of Marcus Smith’s life and experience.