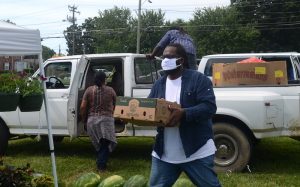 On the last weekend in June, two new farmers markets opened in Greensboro and High Point, NC. Operating under the name Bountiful Land Food for All Farmers Market, the markets at 701 East Washington Drive in High Point and 1901 McConnell Road in Greensboro are a project of the Guilford Urban Farming Initiative (GUFI), a recipient of a “Cultivate Resilient Communities” grant from the NCA Center for Communication, Community Collaboration and Change (CCCC) at UNCG.  The Greensboro market is co-sponsored by the North Carolina State Conference of the NAACP. The goal of the markets is to create an urban space where farmers can sell their produce while providing fresh and healthy food in areas where shopping options are limited.

“We had the right partnerships,” says Will Pharr, marketing director for GUFI, referring to the organization’s networking with the NAACP and others in creating the markets. “The goal was to work with the cities to get land for use as farmers markets and to find farmers who needed to sell their produce.” Creating such networks of mutual interdependence, either formally or informally, is key to building and maintaining community resilience, particularly during an era of turmoil such as a pandemic (Kuecker & Hall, 2011; Omata, 2012).

“At the moment, we are in the middle of a pandemic, so creating a space like that is difficult,” says Dr. Etsuko Kinefuchi, a professor in the Communication Studies Department at UNCG who is collaborating with GUFI as part of the CCCC’s resiliency project. 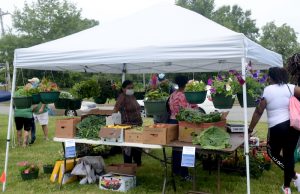 “Still, I see people greeting each other and sharing stories, and that is how we develop a sense of community. I think it is significant that the market is at the location where the Greensboro Massacre occurred 21 years ago. It is marked by the tragedy caused by racism, but the place can be a symbol of community resilience, and the market can be a part of creating that.”

One of those unloading produce and moving it to tables at the Greensboro market is Phillip Barker of Operation Spring Plant Inc. an organization that supports Black farmers and seeks to introduce young people to the world of farming.

“We must have farmers,” says Barker, stressing the long history of Black farm ownership. “We want Black farmers to continue on their land as owners and operators. The challenge is, ‘Who are we leaving these farms to?’ There’s a basic disconnect between the next generation and farming.” 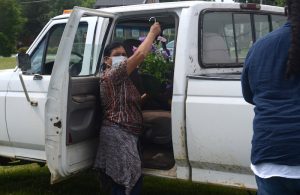 To create a link between present-day farmers and the ones of the future, Operation Spring Plant Inc. runs a mentoring program that brings together young farmers with senior farmers.

“We have to pass these habits on,” says Barker. “It’s important to understand that not all food is nutritional, and we need to provide a way of adding healthy food to people’s diets.”

Pharr said that the goal of the markets is not just to provide a source of healthy food, but to meet the community’s other needs.

“We’d like to get COVID-19 testing,” he says, “and people offering other social services, like health counseling. We are also working to make the market self-sustaining by having it run by members of the community.” Bountiful Land Farmers Market’s goal is to pay a living wage to  community members who can  assist with operations and logistics of running the markets.

Providing non-food services at the Greensboro market is NCFIT, a program that normally helps formerly incarcerated people maintain their physical and mental health as they re-enter society. At the market however, they provided information on healthcare to members of the larger community. 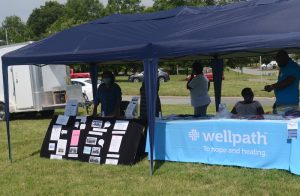 “With Guilford County Sheriff Roger’s approval, we’ve taken the jail program out to the public,” says Tanya Dubois, the health service administrator at the Guilford County Jail, which is overseen by the Sheriff’s Department. “We’re inviting different programs in the community that people may not know about to join us.”

“This has been a dream of mine,” says the Rev. Dr. T. Anthony Spearman, the NAACP State Conference president, as he looked out at the market. “When I became president, I enlisted the support of Dr. Deborah Barnes (chair of the anti-poverty committee at the State Conference of the NAACP and one of the research team members working with Dr. Kinefuchi), because I had developed an interest in food insecurity. I’m really excited that we’re involved in the market. It’s a very well-attended event, on such a wonderful day.”

The Bountiful Land Food for All Farmers Markets are open every Saturday in High Point at 701 East Washington Drive and in Greensboro at 1901 McConnell Road  from 10am to 2pm.

Copyright © 2022. UNC Greensboro. All rights reserved. | If you have a disability and are having trouble accessing information on this website or need materials in an alternate format contact smparke3@uncg.edu for assistance.